The Company’s strategy to achieve its objective is by means of an exploration approach based on a highly focussed and cost effective methodology which in turn is based on management’s successful track record.

The Company’s methodology lays emphasis on a tightly controlled and cost conscious assessment of geological areas that the Company considers may have major mineral and economic potential but which have either been overlooked or not subjected to modern exploration techniques. When considering potential targets, the Company also places emphasis on political stability, good infrastructure, accessibility and a mining friendly environment. Ireland and Finland both fulfil these requirements.

The Company’s main project in Ireland lies within the Longford – Down Massif where the Company has discovered a new European gold district extending for 30 miles from County Armagh in Northern Ireland across Counties Monaghan and Cavan in the Republic of Ireland. A series of gold targets have been identified along this trend all of which lie within the Company’s licence areas. A conventional open pit gold mine is now planned on 20% of one of these targets, as the initial stage in a multi-deposit strategy.

A comprehensive and successful exploration programme based on this strategy has achieved, at a very low cost by industry standards, the discovery of a new European gold district which extends for 30 miles (50 km) across counties Armagh, Monaghan and Cavan in Ireland, together with an extensive 100 km2 zinc anomaly.

A series of major gold targets have been identified by Conroy Gold along this 30 mile trend and licences granted which give security of tenure over both the gold and base metal targets. 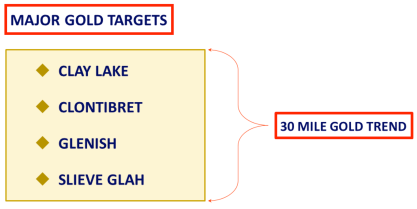 Conceptual studies by the Company suggest the potential for 15–20+ million ounces of gold within the 30 mile gold trend covered by the Company’s licences.*

A conventional open pit surface gold mine is now planned on 20% of one of these targets, Clontibret in County Monaghan, as the initial stage in a multi-deposit strategy.

The Company also has projects elsewhere in Ireland and in Finland. All of the Company’s projects are wholly owned by Conroy Gold and Natural Resources plc.

The Company also has exploration projects elsewhere in Ireland and in Finland. All of the Company’s projects are wholly owned by Conroy Gold.

* This projection is based on the 1m ounce JORC-compliant resource outlined in only 20 per cent of the Clontibret target, the potential of the remaining 80 per cent of that target, the new discovery at Clay Lake and other large gold-in-soil anomalies that have been outlined elsewhere on its licences. To date there has been insufficient exploration carried out to define the mineral resources as estimated above (other than the scoping study resource). There can be no certainty that exploration will result in resources of the above magnitude being realised.