Base Metal Targets in the Longford-Down Massif

Conroy Gold’s exploration programme in the Longford–Down Massif which included the collection of over 15,000 soil samples and a comprehensive airborne geophysical survey, has led to the identification of an extensive metalliferous system in the Massif and of many other gold and base metal targets within the Company’s licence area.

The significant gold potential of the area as a whole is shown by the presence of the Clontibret gold target and the discovery by the Company of the Clay Lake, Glenish, Slieve Glah, and other gold targets along the 40 mile (65 km) gold trend within the Company's licence area in the Longford-Down Massif.

Adjacent to the gold trend discovered by the Company is the historic lead-mining area, known as the “South Armagh-Monaghan Mining District” where over twenty lead mines were worked in the past. Exploration by the Company has demonstrated a very extensive zinc-in-soil anomaly to the southeast of the Clay Lake gold target.

To the south of this zinc-in-soil anomaly lies the Newry Igneous Complex (a granodiorite I-type intrusive) which has known associated copper and molybdenum occurrences including the historic Tullydonnell copper mine. 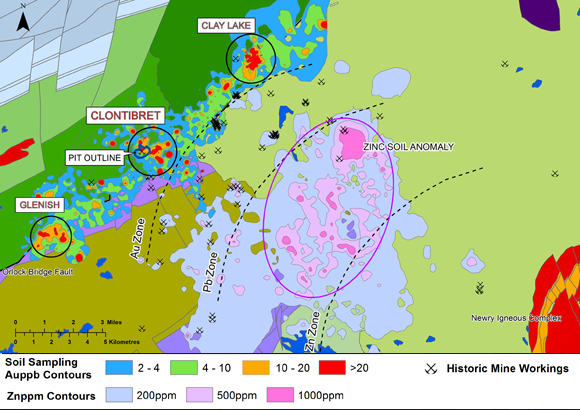 Zonation of the extensive metalliferous system in the Longford-Down Massif.

A large and significant zinc anomaly was discovered by the Company extending into counties Armagh and Monaghan. The anomaly lies to the south and east of the Clay Lake gold target and the historic Armagh-Monaghan Mining District.

The anomaly covers an area measuring approximately 100 km² with enhanced zinc values of 200 to 500 ppm. An area of some 20 km² has zinc-in-soil values in excess of 500 ppm Zn and ranging up to 5,000 ppm Zn. An airborne geophysical anomaly is associated with the geochemical anomaly. 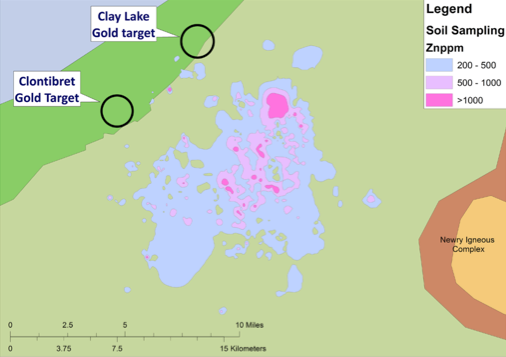 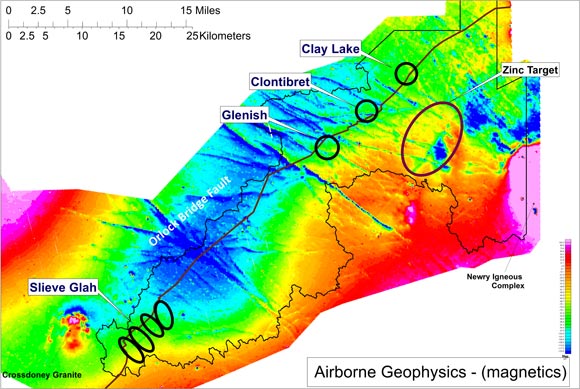